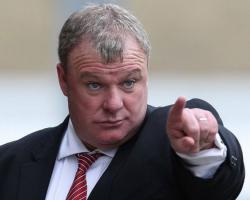 Mansfield Town manager Steve Evans followed up the news of releasing four players just prior to New Years Eve, with the announcement he had made the same number of signings, a combination of contracts and loan deals that would run up to the end of the season.

First up was the news that Yoann Arguin has signed on a un-dislosed contract, subject to international clearance

He was down the road a while ago, at our insignificant loal rivals, Notts County who look to be impressed we have snapped up the 28 year old.

Arguin was also a regular in the pressure cooker Scottish League with St Mirren and Ross County, but that is the equivalent of playing six a side down at the One Call on a Wednesday night.

Evans followed this up with the capture of Jake Kean on loan from Sheffield Wednesday, the 25 year old keeper will probably head straight into the line up for the clash at Blackpool over the new year period.

Sheffield United midfielder Ben Whiteman, also 25, has joined on loan until the end of the season.

Whilst, also joining the Evans rollercoaster is Joel Byrom (30), who was released by Northampton Town

Byrom was a regular as the Cobblers swepy all beside them last season.