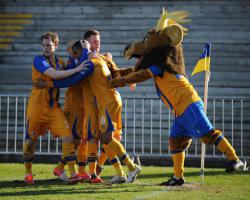 football.co.uk/match_reports/mansfield_scunthorpe_3632048-9.shtml">Mansfield 0-2 Scunthorpe: Match Report - view commentary, squad, and statistics of the game as it happened.

League Two leaders Scunthorpe made it nine games unbeaten as they eased to a 2-0 win at Mansfield to complete the double over the Stags.


The Iron grabbed the only goal of an exciting end-to-end first half having already come close three times in the first seven minutes.


Goalkeeper Sam Slocombe had got down well to his right to turn away a low goalbound shot from Matt Rhead and also watched Rhead and Lee Stevenson miss the target from good positions.


Instead, from their first attack on nine minutes, a clearance to Hayes, 25 yards out, saw him pick out the top-right corner with an absolutely brilliant finish.


Sam Winnall prodded a chance straight at Alan Marriott in the 27th minute before the keeper tipped away a Christian Ribeiro cross that threatened to creep in and then he was happy to see Niall Canavan head the corner onto the roof of the net.


Rhead headed just over and Stevenson snatched at another chance as the Stags went in unlucky to be trailing.


After the break, the visitors had chances to grab a killer second with Winnall and David Syers inches off target and Winnall also heading at Marriott from eight yards.


Stags did have chances and Rhead hit another chance straight at the keeper while John Dempster saw a header blocked in front of goal.


But it was all over with 15 minutes remaining when Winnall did well to knock down a far-post cross from the left and Hayes applied a deadly finish from close range.


That left the Stags without a win in 10 home games and they were booed off the pitch at the end.