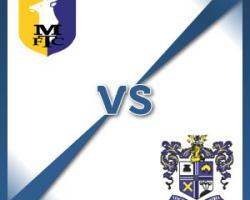 Mansfield V Bury - view commentary, squad, and statistics of the game live.Brown blow for StagsJunior Brown will miss out for Mansfield when promotion-chasing Bury visit the One Call Stadium.The Stags feared the worst when Brown limped off with a hamstring injury at Cheltenham last weekend but scans have shown no serious damage and the winger could be back in action in less than a fortnight

Brighton loanee Jeffrey Monakana should replace Brown in the starting line-up.That may be the only change made by Adam Murray, although strikers Matt Rhead and Rakish Bingham reminded the Mansfield manager of their availability with goals for the reserves this week.Defender Michael Raynes also featured for the second string on his return from a hamstring injury and is now ready to return to the Stags squad.Defender Adam El-Abd will miss out for Bury.The centre-back must serve a one-match suspension following his dismissal against Oxford, so either Jim McNulty or Keil O'Brien will replace the loanee in the Shakers' back four.Striker Daniel Nardiello is still not ready to return from a hamstring problem, with boss David Flitcroft revealing his slight tear will keep him out of action for a second straight game.However, the Shakers' attacking options are boosted by Hallam Hope's return to full fitness from a hip flexor injury