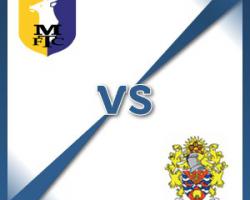 Mansfield V Dag & Red - view commentary, squad, and statistics of the game live.Monakana set for Mansfield bowJeffrey Monakana could make his home debut for Mansfield when Dagenham visit the One Call Stadium.Monakana, on loan from Brighton, made his Stags bow in the defeat at Oxford but will hope to keep his place in the starting line-up

Fellow winger Reggie Lambe, who Monakana replaced in the side last weekend, may also feature despite his hamstring issue.Mansfield manager Adam Murray, who has no new problems, felt his team looked tired against the U's so he could make changes on Saturday, with the likes of Matt Rhead, Rakish Bingham, Jamie McGuire, Lee Beevers and Billy Kee all vying for recalls.Liam Hearn, Luke Jones and Matty Blair remain long-term absentees.Dagenham boss Wayne Burnett celebrates two years in charge this week and has no new injury worries.Jamie Cureton is still chasing his 250th career goal after drawing a blank last week as he searched for his 13th goal of the season.The Daggers lost their six-game unbeaten run with a 3-1 defeat to Burton last time out