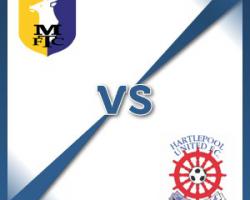 Mansfield V Hartlepool - view commentary, squad, and statistics of the game live.Taylor banned for StagsMansfield will be missing the suspended Rob Taylor against Hartlepool.Taylor was sent off in the first half of the win at AFC Wimbledon last weekend and the winger will begin a three-match ban on Boxing Day.Stags boss Adam Murray, who has made five changes to his starting line-up in each of the last three games, could have another enforced change on his hands after Vadaine Oliver limped off injured at Kingsmeadow

Murray will make a check on the on-loan Crewe striker.Lee Beevers was left out of the squad altogether against the Dons and he will hope to be involved this time

Fellow defender John Dempster is nearing a return from injury.Hartlepool defender Michael Duckworth is hoping to return to contention following an injury lay-off.Duckworth has missed the last four games due to a groin injury but could be included in boss Ronnie Moore's plans.On-loan Sheffield United striker Joe Ironside is nursing an ankle injury sustained in last week's home draw against Oxford but should be available, while winger Jack Compton is expected to shake off illness.Tommy Miller (calf) is not quite ready for a return to match action and fellow midfielder Matty Dolan has returned to parent club Bradford after sustaining a hamstring injury