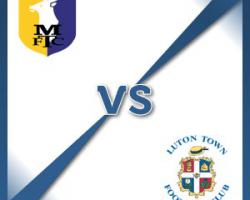 Mansfield V Luton - view commentary, squad, and statistics of the game live.Murray hoping for injury boostMansfield manager Adam Murray will be hoping his injury problems cease to mount as he prepares his team for the visit of Luton.Murray named himself in the squad on Saturday for the first time since taking the job on a permanent basis at the beginning of December, making his first appearance since mid-November as a late substitute.Michael Raynes (hamstring), Callum Elder (calf) and Chris Clements (ankle) were all out against Northampton, joining long-term absentees Luke Jones, Liam Hearn and Matty Blair on the sidelines.Defender Raynes and midfielder Clements look likely to remain out while Ricky Ravenhill (hamstring) will be assessed, so Murray may have to involve himself once more.While Mansfield's problems are injury-related, it is suspension that sees Luton travel without three players.Luke Wilkinson was sent off against Carlisle at the weekend and he will begin a two-match ban

Fellow defender Steve McNulty is half way through a four-game suspension while new signing Cameron McGeehan is unable to play as the Norwich midfielder was sent off in the final game of his previous loan spell at Cambridge earlier this month.Pelly Ruddock Mpanzu returned from a three-month injury absence on Saturday as a substitute but the midfielder is back in the treatment room after sustaining a new problem.Alex Lawless (foot) remains a doubt for the Hatters while striker Paul Benson is closing in on a return from a broken leg