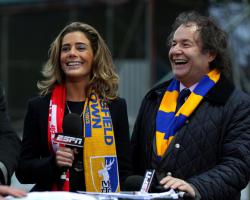 Radford, 35, wife of the Sky Bet League Two club's chairman John, is one of five candidates bidding for two places currently available to represent the Football League on the FA Council.

Radford, who graduated from Durham University with a degree in politics, said on her Twitter account that her song was a tongue-in-cheek imitation of a campaign video once used by former US president John F Kennedy.

In the video Radford sings the lyrics: "Do you wanna a girl on council, who is seasoned through and through, but not so seasoned she won't try something new."

Radford, appointed Mansfield chief executive in 2011 when she was 29, pointed out on Twitter she was "spoofing an old JFK ad".

She added that it " might raise a few smiles"

The couple married in the summer of 2012.

The Stags were promoted back to the Football League in 2013, ending their five-year absence